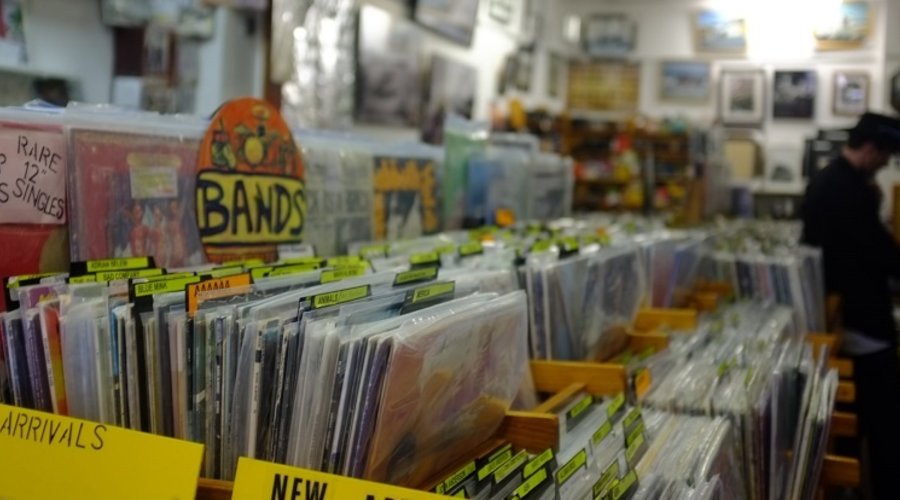 Pick up these hot new releases at your favorite New Orleans record store.

It's a new month, which means new music releases that you can get at Mushroom New Orleans! Here is what's gracing our shelves this September. We also carry high-quality Crosley record players if yours might have crapped out during a Hurricane Ida power surge. We're here for you!

Fans of this Las Vegas-based pop rock band agree that it embodies the city like no other with its pyrotechnics and other flashy effects. Even frontman Dan Reynolds looks a little like a fabled magician who just belongs on stage. The band's fifth studio album was produced by the legendary Rick Rubin. Its name is inspired by the word "mercurial," an allusion to Reynolds's mental health struggles. Though touching on themes of loss, grief, and loneliness, the album ultimately embraces and celebrates life.

This is the seventeenth album by the legendary British heavy metal band. The Japanese word "senjutsu" means "tactics."

Following "The Book of Souls" (2015), "Senjutsu" is the band's first studio album in nearly six years, marking the longest gap between two studio Iron Maiden albums. This is also their second double album. It features songs written by bassist Steve Harris and impressive Samurai-themed cover artwork by illustrator Mark Wilkinson, who has worked with the band before.

In an interview with WGRD 97.9, drummer Nico McBrain spoke about how he and his bandmates have been keeping the details of this album a secret since they finished it in early 2019 during their "Legacy Of The Beast" tour.

​The god of party metal is still partying hard in this follow-up to "You're Not Alone" (2018). It's not all fun and games. Although the album is mostly upbeat, there are bleak moments as well. (Just look at the arresting cover art.) In "Everybody Sins," Andrew W.K. declares: "Your god is a liar/Deceive and desire/Knowledge eaten long ago."

This is the fifth LP by the unrelenting rocker. It contains a previously released track, "Babalon," and it is accompanied by a music video for a new single, "I'm in Heaven," directed by Phem C. Palmer.

"I suppose if a story is being told about anything, I'd say it's just about partying," Andrew W.K. told the online magazine Metal Injection. "A trained fool, a part-time person, a representative of natural inhumanity, a cheerleader for the eternal delusion, a partier version of a human, an amateur being. And also not this stuff. I don't know."

The acclaimed singer-songwriter is back with a follow-up to her much-praised, chart-topping album "Golden Hour," which won in all four of its nominated categories at the 61st Grammy Awards, including Album of the Year and Best Country Album, though "Star-Crossed" moves beyond country toward a more pop-oriented sound. The fact that Musgraves cites Daft Punk, Sade, Eagles, and Weezer as inspirations is telling.

Rolling Stone calls the album "consistently compelling" and "admirably idiosyncratic." According to the magazine, it "nudges the galactic disco-cowboy country-pop of Golden Hour a bit further. Her first collection with zero Nashville co-writers not named Ian Fitchuk or Daniel Tashian barely has any banjo. It does, however, have loads of expensive-sounding synths, a bonkers flute solo and a Spanish-language cover of a song by Chilean folk legend Violeta Parra."

The Vaccines, "Back in Love City"
Release Date: September 10

The fifth studio album by this arena-filling English indie rock band is a 13-song set that reflects on the role of escapism in modern life. It follows four Top 5 UK albums, including the number one album "Come Of Age" (2012) and 19 singles playlisted on BBC Radio One. Thanks to the pandemic, the Vaccines took a step back from playing live, hunkered down, and created a fictional Love City where people can find peace, safety, and connection. Three singles -- "Headphones Baby," the title track, and "Alone Star" -- have been released in advance of the album.

The Berlin-based German-Iraqi artist, DJ, and producer known as Boys Noize (born Alexander Ridha) is releasing a new album later this month. The album is entitled "+/-" (pronounced "Polarity"). Boys Noize has already released two new singles from the album: "Nude," featuring Tommy Cash, and "Xpress Yourself." Ridha says: "The album dives into the polar tension between the musical styles and worlds I find myself in. When you combine opposites, something transcendent can take place, something greater than the two parts. And with music, it becomes a magic that can create new worlds."

Have we missed any important new releases? Stop by Mushroom New Orleans, the longest-operating independent record store in New Orleans, and let us know. And keep in mind that we buy and trade used records.