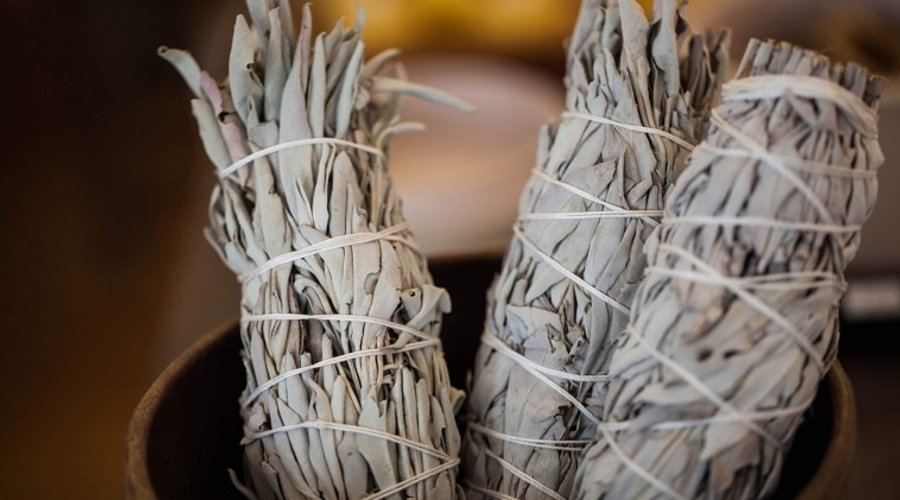 How to Smudge for Positive Energy

Mushroom New Orleans has everything you need to clear your space.

If you are moving into a new space and need to cleanse it of some stale energy, try smudging.

Smudging is an ancient purification ritual in which dried herbs are ignited to produce smoke that is waved around to purify people and spaces.

Native Americans have practiced smudging for centuries, but they are not alone. The ritual is also performed in other cultures and religions, like Buddhism. Modern healers and aficionados of feng shui use smudging to cleanse and renew the energy of mind, body, and spirit.

Practitioners generally believe that you should perform a smudging ritual before moving into a new place, after arguing with someone, or when you feel that your space has accumulated bad or stale energy. Some also smudge when the seasons change or during a new moon. There is no set rule about how often to do it. Smudge once a year, once a month, or as often or rarely as you like.

Anyone seeking balance and peace of mind can adopt this practice. All you need is a positive intention and a few tools: dry herbs in a bundle or braid; a candle or matches; a fireproof container; and an abalone shell or a bowl of sand, or something else that you can use to safely extinguish the herbs. Use the fireproof container to catch any ashes or embers by holding it under the burning bundle. A clay or ceramic bowl will work. At our New Orleans smoke shop, we offer a complete smudging kit that contains palo santo, sage, yerba santa, and abalone shell.

The herbs commonly used to purify people, homes, and workspaces include white sage, cedar, lavender, and sweetgrass. One favorite is the wood of the South American palo santo tree.

White sage produces a strong, rich, bitter fragrance. It is associated with purity and said to ward off negative energy from your home and body, preparing them to receive positive energy instead.

Also known as "holy wood," palo santo produces a fresh and relaxing fragrance that is perfect for frequent use. It is said to promote creativity, encourage healing, and attract positive energy. Palo santo was first used by the Incas in prayer and spiritual ceremonies to bring good luck, improve mood, and cleanse surroundings.

Yerba santa or "sacred herb" creates a sweet and inspiring aroma to enhance the effects of previous smudging and to promote protection, strength, and growth. For thousands of years, Native Americans have used this herb both spiritually and medicinally.

Abalone shells are the perfect receptacle for safely smudging the herbs in this kit as well as any others you may try. Using a shell for smudging also means that the natural elements of earth, air, fire, and water are represented in the ritual. The dried herbs represent earth; the smoke that is produced represents air; the ignited herbs represent fire; and the shell, having come from the sea, represents water.

Meditate or take a few deep breaths to relax and set your intention. If you are smudging a space, open all internal doors, cabinets, and drawers. Light the bundle using a candle or matches until it smolders and starts releasing smoke. Wave the smoke over yourself first to cleanse your body, mind, and spirit of negative energy.

Beginning at the front door, now carry the lit bundle over the fireproof container to wave the smoke into every room, corner, open closet, open cabinet, and other spaces. Waving the smoking bundle like a wand, move around clockwise until you have covered every nook and cranny. When you are finished, gently and safely extinguish the smoldering bundle in a bowl of sand, an ashtray, or an abalone shell. You can reuse the bundle later. Open the windows and external doors to let the smoke out.

If you have any questions or want to know more about our smudging kits and sage collections, give us a call at (504) 866-6065 or stop by Mushroom New Orleans any day between 10 a.m. and midnight. It's worth the trip!