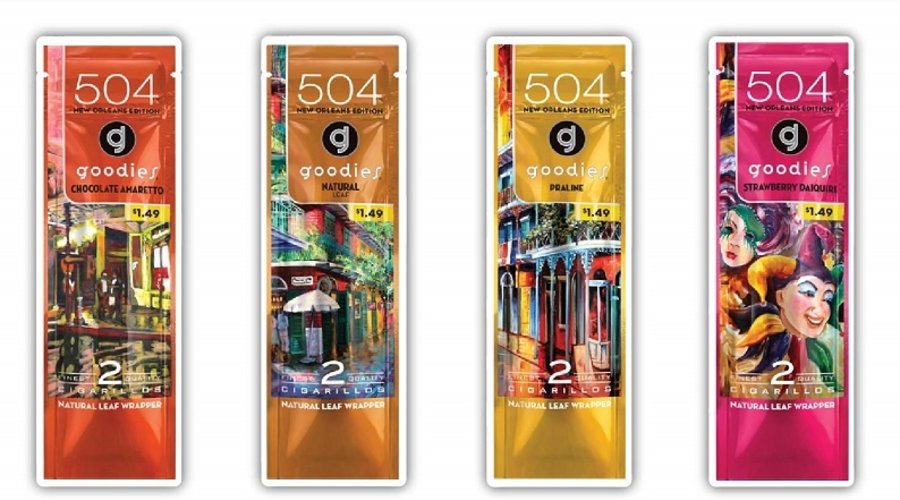 Swing by your local smoke shop for these inspired cigarillos.

The four varieties of 504 Goodies New Orleans Edition cigarillos, available at Mushroom New Orleans, bring an experience of not only the flavors of the Crescent City but also its sights, thanks to packaging featuring artwork by several local artists, including Dianne Parks.

A different New Orleans painting, each one colorful and almost Impressionist in its rendition, adorns the resealable foil pouch for each variety. Dianne Parks, the artist who created 504 Goodies' French Quarter paintings, shared the inspiration behind her oil and acrylic artwork.

"The painting was originally created immediately after Hurricane Katrina," says Parks, a New Orleans native whose work hangs in galleries, hotels, and private collections throughout the country. "I was walking in the Quarter in September of 2005 and, thankfully, all the buildings were intact; however, the life had been sucked out. There were very few people, no green plants on balconies, everything was still and quiet and sad."

Saddened to see the city stripped of its vitality, Parks snapped a few reference photos and retreated to her studio, where she composed the painting, building it "by layers -- thin darks up to opaque lights," as stated on her website.

"I was determined to bring back to the scene some of the life I knew had been there, but with a quietness and strength about it," Parks said. "And that's how the painting was created."

New Orleans has been revitalized and rebuilt in the 15 years since Parks created her French Quarter painting -- thanks in major part to artists, musicians, and other culture-bearers. 504 Goodies salutes their efforts with four flavor profiles, each highlighting a different aspect of the city's culture: Natural Leaf is an homage to the city's history in the tobacco trade, featuring a smooth, rich taste. Chocolate Amaretto is a nod to New Orleans' pivotal role in the development of the cocktail. Praline offers nods to the quintessential Southern dessert, with hints of pecans, sugar, and cream. Last, Strawberry Daiquiri is a flavorful reminder of Louisiana's sweet local strawberries and its signature drive-through daiquiri shops.

What does Parks think of the smokes her artwork adorns? "I'm not a smoker, so have not tried the cigars," she said. "But I understand from a friend that they are wonderful!"

504 Goodies is available at Mushroom New Orleans. Stop by today and pick up the flavor that speaks to you, or shop our extensive collection of cigars.